Collyer’s student Oscar Cheung has been nominated for a film award at the 2022 Student World Impact Film Festival, for his film “Tiresome”. Students Mikey Sprules, Jade Riaud Langouet and Florence Bray also contributed to the project as the production team.

Rebecca Moon, Collyer’s Head of BTEC Creative Digital Media said: ““We are so proud of what Oscar, Jade, Mikey and Florence  have achieved in Tiresome, his hard work and dedication to screenwriting is paying off and we hope to see him succeed in industry “

Oscar said: “Being nominated is the first step towards my future career, the nomination has finally materialised from hard work and dedication to film, media, and script writing.

“This is such an exciting opportunity, and I will be grabbing it with both hands. This would not have been possible without the production team; throughout the process we grew close as professionals and friends.”

Stuart Andrews, Head of A-level Film Studies added: “Oscar should be incredibly proud of himself, and I have never known such a determined and prolific student when it comes to creative work. His recognition at this international competition is testament to his talent and ambition”. 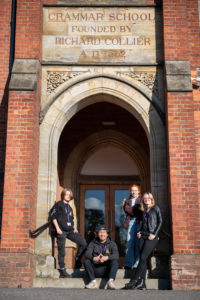